This is the first gun show I’ve attended in quite a while. It was spurred by Tuesday’s election, but I did not go to “stock up”. My goal was to distribute as many “I STAND for Liberty” decals as possible. Rather than just hand them out, I attached them to a half-sheet of paper with some bullet points – no pun intended – about Liberty and plugs for TheLibertyCoalition.org 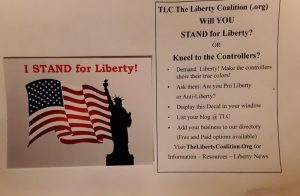 As you can see – it was a quick and crude job but it was the best I could do on short notice. They turned out all right and were generally well-accepted. I did not charge for these but I did accept whatever was offered.

There were some interesting individual reactions.

One vendor, a manufacturer and purveyor of Kydex holsters resisted at first. Her reason? She did not want to get involved in political debate. She was more responsive as I pointed out liberty is not a political issue.

A few were enthusiastic. These are the ones who inspired me most. One looked at the sheet and said “I kneel for no one.” Good for him and I said as much.

Another lady came back less than a minute after taking one and said, “I kneel for injustice.” I will say no more, though I did ask her what that had to do with liberty.

A few shrunk from the proffered decal. It was almost as if they felt liberty would bite them. While I am certain their response was more an aversion to “free” things and the often subtle expectation of reciprocation. I cannot help linking some reactions to the idea that liberty scares some people.

One fellow did not shrink but politely refused. This was toward the end, I was weary and that is always dangerous. I turned to my helper and said, mark one down – doesn’t want liberty. He did smile at that. Whew! He was a rather big, fit fellow.

A couple stated they did not put decals on their cars. I totally emphasize with that sentiment. I tend to feel the same way myself, but at this point, I am beyond it.

Several did ask for extras. I gladly handed them over. On fellow would only accept it if he could have two so he could put one on each window of his truck. No worries. Here ya go!

My impression of the general mood of the attendees was they were not nearly as riled up as I expected. There was at least one announcement over the loudspeaker concerning recent events. I’m not sure how many paid attention. Even I did not catch all he said and I am intensely interested. There was too much going on as in any busy marketplace.

Overall I’d say my venture was a success, though nearly as much as I’d hoped. However this can be attributed to a unrealistic set of premises and expectations. It is too early to tell what the long-term effects might be. I met a lot of people and I was able to gather in their concerns. This alone was telling.

One observation I can make is the normalcy bias is in full effect in some. Others can sense the change but they either express feelings of helplessness or lament that nothing can be done. After all we voted… didn’t we? What else is there? A few are obviously preparing to do battle – and no, I do NOT mean armed combat of any sort. I do not recall a single word spoken or implied about anything that could be remotely considered armed rebellion or any other act of violence. Contrary to the fantasies of the controllers and their minions, we are simply not like that. What I DO mean is they see this last election as a setback rather than total defeat. Some plan on showing up at the capitol for the first legislative session. I gather they are determined to make their voices heard.

In conclusion, I feel this was a worthwhile venture. I may try this again at some point – either at another gun show or some other local event. I may even set up a table, though I am a bit daunted by the expense at this point. Meanwhile I’ll take some time to reflect on all of this and let it all sink in.