Like many of you, I’ve been scratching my head over the left’s rabid push to defund police in cities across America. Even more puzzling is why they continue to demand this foolishness even after crime ramps up across the board as any intelligent person might expect. Still they scream their demands. While I am no fan of unethical, overbearing police practices, defunding the police is certainly not the answer to the problem! So why the push? Then the light came on…

The Next Step Is a National Police Force!

This may surprise you but in September 2020, President Trump called for this. As far as I know no one, not the media, nor any politician has put this idea forth. So how did I conclude this is in somebody’s works? Bluntly put it was an epiphany that made absolute sense. Simple observation of current events leaves little room for doubt. Consider what we already know.

At some point the masses will scream for a solution. They will want protection from rampant crime but “OH NO!” NOT those evil police! Then the “obvious solution” will emerge – a national police force. Why they’d be highly trained and held to strict standards… wouldn’t they? And, of course, answerable to nobody but the federal authorities.

Will It Take a “National Emergency”?

In order to shove this down our throats, look for declaration of a “national emergency”. All of a sudden, the “woke” crowd will recognized the necessity of law enforcement. The politicians will be only too happy to step in and take over all of the law enforcement dutiees in the nation. How will they come to terms with our county sheriffs? This remains to be seen but I have no doubt somebody is trying to think of a way to dispose of our only constitutional law enforcement.

For those who remain level-headed, we know what needs to be done. Local law enforcement must be kept in place. EVERY LEO needs to be better versed on what is and is not constitutionally acceptable. Any and all policies and practices not adhering to constitutional principles need to be abandoned – this includes such practices as asset forfeitures and “no-knock” warrants. Those few officers who abuse their authority should be summarily dismissed and/or brought to justice.

The inherent dangers of a national police force should be evident, especially in light of recent revelations regarding the FBI, NSA, BATF and other agencies. Couple such a concept with proposed red flag laws and we have a recipe for institutional terror in a national scale. Imagine a fully militarized SWAT team descending on your home at 3AM to collect on your unpaid parking ticket, and oh!, while we’re at it we should confiscate any guns, ammo, cash or other valuables laying around just be certain they weren’t obtained by some illegal means.

Even IF no proposal for a national police force ever comes to light, the other abuses mentioned above need to be addressed. Unconstitutional laws need to be removed, police and criminals must be held accountable. The foolishness of defunding the police must be abandoned. 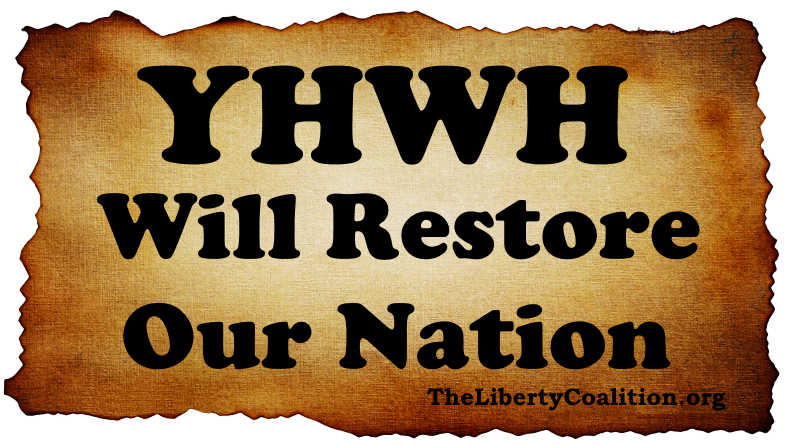 YHWH will restore our nation!

Long before I started this site, I sought answers to the questions perplexing me.

What is wrong with our nation?

Have we all been living a lie?

Is our freedom a lie?

Is liberty a lie?

If the ideas of liberty, freedom and the pursuit of happiness is true then why does our nation sink deeper and deeper into the muck and mire?

Where is GOD in all of this?

The answers to my questions and prayers came. They still come. GOD ALMIGHTY – YHWH – has NOT abandoned us! HE has been with us all along. WE have ABANDONED HIM! We have gone our own way – sought our own path – while ignoring the truth!

This very day I saw the answer to our nation’s strife clearly. We are not done yet!

YHWH – ALMIGHTY GOD WILL restore our nation! HOW?

We must turn to Him! Confess His only begotten Son Jesus – the Messiah as Lord and believe in our hearts GOD raised him from the dead! (Romans 10:9)

Call our brothers and sisters in Christ to return to GOD – confess our sins and repent of our wicked ways.

Pray daily and ask our Heavenly Father to restore our nation. HE is faithful!

May GOD ALMIGHTY, our Heavenly Father and our Lord Jesus the Messiah bless you and keep you!