IS it Too Late to Reclaim Our Birthright? Can all liberty-loving citizens become involved like we saw in the 2A sanctuary movement? Short answer? Nobody knows for sure. Things to consider…

Nearly all of the 2A sanctuary movement is a reaction to a severe and direct threat to a motivated set of citizens. The “boiling frog” analogy is often 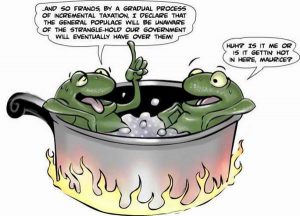 used to describe the way the controllers constantly eat away at our liberties. It is said if you dump a frog into boiling water it will quickly jump out – scalded maybe, but it could live. However if you place a frog in room temperature water and slowly heat it, you will eventually boil the frog without the frog ever knowing the difference. While I know of no one who has actually tested this idea – it paints a vivid picture.

Here in Virginia, a bunch of controllers, drunk with seeing their long lust for power come to fruition dumped the frogs (us citizens) into a boiling pot. We jumped out. Then we fought back. We are still fighting. Unlike groups such as those calling themselves “Antifa”, we’ve been non-violent. The entirely peaceful 2A rally in Richmond, with thousands of armed citizens participating proved this. Unlike the stories painted by the main stream media, it is the controllers who have repeatedly threatened violence, not us. They threaten to turn us into felons via legislation. They threaten to kick down our doors to search for “illegal” property… weapons now. When they’ve disarmed us will they come for our bibles or will they simply herd us into cattle cars destined for “reeducation camps”?

Yes, there are individuals and factions on both sides spoiling for blood and glory – these kinds are always with us. The massive majority of those I’ll call patriot citizens simply want to be left alone to live our lives. The problem is controllers must control.

The boiling frog analogy applies to far more than our God-given right to keep and bear arms. The controllers are determined to micromanage every aspect of our lives. Everything. They lust to own us from cradle to grave… and they very nearly do. When I was a young teen, anxious to join the work force, I found I had to apply for a Social Security number. I had to have this to apply for any “legitimate” employment. Today, our babies are assigned Social Security numbers almost at the moment of birth. Why? Do infants now need to start paying for Social Security and Medicare? (Oh! Sorry, now they like to hide these as “FICA”.) Of course not, it is merely a mechanism for the controllers to track their property. Why else does one need an SS number to see a pediatrician or enroll in school? How long before they insist on what could be described as “The Mark of the Beast”? You tell me.

President Trump has promised he will never now allow our nation to become socialist. My first thought when I heard this was… “You are too late. That bus left the station before we were born!” Our nation began that journey even before Lincoln replaced our constitutional republic with an Empire. FDR ushered in the new age of socialism with a plethora of programs, the shining star being… yep, Social Security. This monstrosity is now entrenched in our very beings.

The question now is are we so enamored with our nice warm bath that we will refuse to get out? Are we so lulled into our drowsy dreamworlds we’d all rather just doze off and sink into the pot. Doesn’t anyone think things are getting a little too warm? From what I’m seeing, the answer is a resounding YES! More and more citizens are realizing not only how terribly wrong things are but the need for us to step up and take charge. While I think this second aspect is more in infancy, I can see the embers starting to glow.

As far as I am concerned it is NOT too late to reclaim our birthright. In fact the best time is the present time. Never before have we had access to the technology possible stay united as a nation while decentralizing the power – returning the reigns where they belong – into the hands of the citizens. This very concept entirely embraces the principles of a republic. Where we’ve failed is we have neglected to hold our representatives accountable. We have closed our eyes while the controllers seized power, trying to rule from the top down. No more! We need not march on our state capitols. We need not march to our nation’s capitol. We only need gather in sufficient numbers at our county seats – a place readily accessible to most of our citizens – and entirely accessible if we all pitch in to help our neighbor who may not be able to make it alone.

A great opportunity is within our reach. I believe God Himself has laid this before us. We were chosen before the foundations of the world..

Ephesians 1:4 According as he hath chosen us in him before the foundation of the world, that we should be holy and without blame before him in love:

5 Having predestinated us unto the adoption of children by Jesus Christ to himself, according to the good pleasure of his will,

6 To the praise of the glory of his grace, wherein he hath made us accepted in the beloved.

When the time was right, Almighty God founded this nation. Yes, He allowed Lincoln to seize control and he has allowed the controllers to nearly totally dominate this nation… or has He? Might it not be more accurate to say He allowed US to neglect our responsibilities to keep watch over those we select to represent us? Nobody wants to be blamed but we can no longer shirk our duty only to shake our fists the politicians and their faceless puppet masters. Indeed politicians are considered by some to be among the lowest lifeforms on earth. As a group one could say they are despicable, but in reality are they not just human? How many of us could land in high political circles, be wined and dined, given VIP treatment everywhere we went and not succumb to those and greater temptations?

We can still reclaim our birthright. It is not too late but our window of opportunity is shrinking. How long before the controllers succeed in squashing all opposition? Already they are instituting unconstitutional “Red Flag” laws so they can squire away anyone they deem “dangerous”. 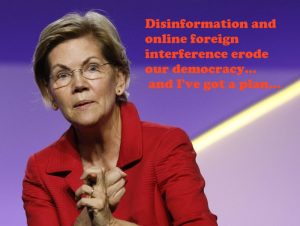 This very morning Elizabeth Warren – you know Pocahontas herself – proposed laws to stamp out disinformation. She says “disinformation” erodes our democracy. I quickly commented on her tweet to point out she herself is spreading disinformation – our nation is a constitutional republic NOT a “democracy”. Do yourself a favor… when anyone touts “democracy” think “mob rule”. We cannot allow such people to continue to think they rule us! If we do they will and SHAME on us!

In future articles I will delve into some ideas on how to accomplish this and other thoughts on the subject of reclaiming our birthright, our nation, our freedoms! Stay tuned or better yet get involved!