During the height of the “Cold War” we all became familiar with the concept of MAD – Mutually Assured Destruction. The crux of the concept was – if the Soviets tried to nuke us into oblivion, we would nuke them off the face of the earth. Everybody loses. Yes, it was also called the “Scorched Earth” policy. MAD was a better term because the entire idea was indeed insane. My question is: is the Wuhan virus the globalists’ version of MAD?

First off, let’s not talk “conspiracy” huh? Instead, how about we think in terms of “opportunity”? Whether or not anyone planned on unleashing this virus on the world is a moot point, at best. If this was someone’s plan it turned out to be a bungled mess. When the smoke clears there is a good chance fear of the virus tallied more deaths than the virus itself. Likewise the aftermath – the totally irrational response to the so-called “danger” the virus presented. Bluntly put, I seriously doubt if any of the “elites” are competent enough to pull such a stunt off. They would find a way to drop all the balls. And yet… here we are in a nation, a world actually, almost totally shut down and firmly in control – or so they think – of a handful of controllers. Please, do not give the controllers too much credit. As ruthless and sociopathic as they are, they aren’t all that brilliant. What they are is better described as cunning and opportunistic.

Consider a common career criminal who happens to be walking down the street planning his next mugging. Suddenly an armored truck swerves in front of him and crashes. Miraculously, the doors burst open revealing bags of cash. It just so happens the truck takes out a delivery guy making his last run for the day. His van is left running a few feet from the wreckage. It is empty, seemingly waiting for someone to fill it up and drive away. What does the criminal do? Why, he fills his pockets and runs!

Of course not. He fills up that van and takes off. Chances are he will not live “happily ever after”. He will find some way to screw himself out of his good fortune. I see so many parallels here.

Compare the career criminal in our story with the “elites”. ‘nough said. Regardless of how highly they hold themselves, the “elites” are mere fallible humans just like the rest of us. In some ways they fall far below the curve because they have no clue what it means to live as the majority of citizens. They are, in a word, insulated from our reality. The fact is they are failures in a failed ideology. They will scoff at this as they ponder what gourmet snack to scrounge from their $24,000 fridge but what will they do when their power goes out? I mean, after their generators fail, of course. But I digress…

Career criminality aside, the “elites” must ultimately fail. I say this with such confidence because their basic premise is flawed. While centralization is their ultimate brass ring – it is also the very reason the “elites” have to fail. Remember the adage “don’t put all your eggs in one basket”? Cliche’s are cliché for a reason. Reality will bite them in the ass. What I’m asking is not if but when? Will they take the nation down with them? Unless we stand up, reclaim our authority and put a stop to this nonsense, it is very likely they will at least succeed in scorching the earth beyond recognition.

What the Controllers Want

No secret agendas here – the controllers want control. It is what they always want. Joe “Malarkey” Biden and Hilary “What Difference Does It Make” Clinton have BOTH stated this is the perfect time to “radically transform” our nation. While I cannot find a reference to Clinton’s statement I did find this one from when she endorsed the bumbling one for President:

“It needs to be part of a much larger system and eventually and quickly I hope gets us to universal healthcare so I can only say amen to everything you’re saying,” Hillary said. “This would be a terrible crisis to waste.”

Yes, she actually said that. You just can’t make this stuff up!

Meanwhile, yes, ol’ Malarky Joe said exactly how this was an exciting opportunity to “radically transform the country”

What do they want? More from the town hall event:

Already unemployment benefits pay more for people NOT to work. Can anyone honestly say this is an incentive to get the nation moving economically? Meanwhile Nancy Pelosi and others are proposing a basic monthly income for all. Such can only end in two ways. Such a system will either break under its own weight or make slaves of us all.

Meanwhile the nation’s economy continues to disintegrate. Food is being dumped while the stores are empty. Food may soon be the number one issue facing all of us. We all need food and shelter to survive. If you live in a city – God help you. For those of us in flyover country – it is time to regroup.

Recognizing what is happening is the first step but what can anyone do about it? My own solution is simple – not easy but simple. We need to decentralize. What does this mean? 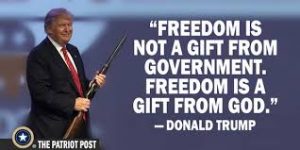 Start now. Start locally. Start right at home. Plant a garden for goodness sakes! If you have a garden already, consider expanding it. Think now about how you will preserve food. Prepare now for a hard winter. If it never comes. If I am totally, absolutely 100% wrong – what have you lost?

Next, gather your friendlies. Find out how you can help them and how they can help you. Make plans and preparations to join forces if necessary. Recently I read something that partly stuck because it made a lot of sense. Basically, it said the key to surviving is to be with about 30 people who care about each other. There may never be a need to gather around one location but it would not hurt to have a plan to do so.

Finally, gain control of your local government. This sounds more radical than it should. I do not mean any sort of “rebellion”, but simply showing up at local board meetings to offer your input. We are a republic. We are self-governed. This means your opinion not only counts but it is your duty to help guide those we put in place to represent us. This duty belongs to all of us citizens.

Planned crisis or not, the controllers are bound to take every advantage. This is their golden opportunity to entrench themselves in our lives. They are not “masterminds”. For my money they aren’t really all that bright. One needs not be intelligent to be cunning. To an extent, I agree with them, but I see a different opportunity – one where WE THE PEOPLE reclaim our birthright – our Constitutional Republic. This is OUR opportunity to beat back the failed centralists, to exercise our God-given authority to govern ourselves while establishing a system that works from the bottom up as it was intended.