It looks like Virginia is seeing a dramatic jump in new cases since beginning to reopen. Okay… so? While the controllers will likely point at this saying “SEE! I TOLD you so!” in their most grade school-like voices, wouldn’t it be better to let sanity and common sense prevail? 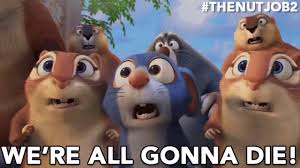 What does anyone expect? Should the virus run away, tail between its legs because we step out? Don’t be silly. It’s a virus. Viruses infect. This virus is gonna virus no matter what. Thus new cases – particularly a significant jump should surprise no one.

The virus needs to run its course. We can only build immunity by exposure. There is no other way. If you didn’t know, a vaccine typically exposes one to a dead virus to allow the body to build antibodies against it. As I am little more qualified in this matter than that venerable climate-change teenager, I’ll admit I could be wrong on this. There could possibly be another way but if there was an easy path, it would seem logical someone would be touting it.

Can anyone say several more weeks or months would generate better results? If you think a viable “cure” is just around the corner, I invite you to pay attention to an ad for any prescription drug. Consider closely the warnings required by law in the small print. My favorites are the ones for treating anxiety and/or depression. Seems like some common known side-affects on these include “depression” – yes, depression, suicidal thoughts and, here’s the best one, “increased aggression”. For some reason every time I hear this one my mind turns to mass killers. I wonder why?

Some other “wonder drugs” warn of things like kidney failure and death. Wonderful stuff indeed. My point is sometimes the “cure” is worse than the disease. In the case of the Wuhan virus, the proposed cure is unconscionable. Worldwide forced vaccination and monitoring tops the list. What? Someone’s going to hunt me down to stick a needle in me? My imagination runs wild with a theme for a  science fiction story. Picture a man on the run after his personal body shield slips and a monitor picks up his infection. The chase is on. What could be worse?

How about continued strict social controls “for our own safety”? How about expansion of monitoring allowing government scrutiny of every facet of our lives? Every. Facet. Let that sink in.

For those who declare “that will never happen!”, how many of you would have said the same about a nationwide lockdown last year at this time?

Back to current events, yes, there may well be a spike in new cases. It may grow higher. Yes, a certain number of these will die. Guess what? We are all gonna die at some point. It is part of living. Even if someone could manage to sequester themselves for the next 80 years, eventually death would come knocking. The real question is… what kind of life is that?

Go forth and live!