Continuing his assault on our Constitution, governor Ralphie Northam now decrees masks are mandatory for all citizens in public places. Again his action flies in the very face of our God-given rights. From my perspective it is an unlawful attempt to circumvent our very Constitutional Republic and replace our lawful government with his own personal dictatorship. In short, his actions are the very definition of treason.

Before I go any further – below is a graphic illustrating the argument against wearing masks: 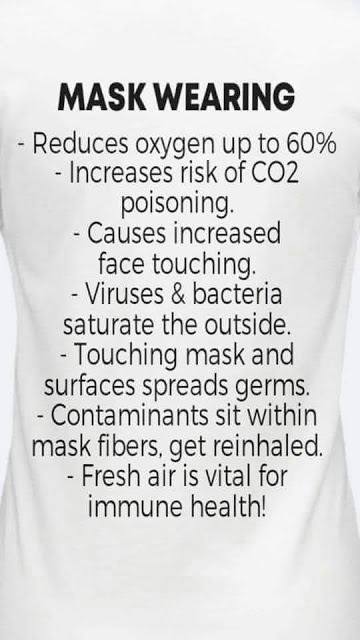 Not even the science is settled, but the question here is… even if science ends up vindicating his stated reasons – by what authority can he issue said orders? There ONLY authority he has is what is granted by our respective constitutions and by the citizens of this commonwealth.  Even as citizens, we do NOT have the option to override the Constitution of Virginia. We may alter or abolish it, but we cannot overrule it.

As such I posted on Lunenburg County’s FB page my concerns and called for the county Board of Supervisors to overrule the governor.  I doubt very much if they will respond without a great deal of pressure from other citizens. I would be surprised if such pressure built into anything larger than a fizzle. However, I cannot, in good conscience at least do my own small part. Here is what I posted on FB.

This FB battle rages. Okay, maybe it is a bit dramatic but there is more since  I pasted this thread together. The bottom line is not everyone agrees – only four people have responded at all – how sad. The dissenters insist our rights are not being infringed upon. Well, if you insist… uh, no.

If there is substantially more, I’ll update it.