All Eyes are on Virginia – first Richmond, then Virginia’s flyover country. Euphorically it resembles a tennis match. I’ve described the battle we face here and in our nation as a spiritual battle, ultimately between the God and Father of our Lord and Savior Jesus the Messiah and the god of this world. Indeed it is. Things look different here on ground level. Putting the spiritual aside… this is what I see.

Unless you are blind or purposely averting your eyes, it should be obvious this nation’s governments have morphed into power-hungry tyrants. In other words 1984 has arrived with a vengeance. On both state and federal level, and often on local levels, they rule with iron fists – stealing our liberty for any purpose whatsoever. Adding insult to injury they force us to pay for the “privilege”. This alone should be enough for us but it is not for the controllers.

Next they add regulatory agencies, allowing them to further strip us of our liberties with little oversight and no constitutional authority. Stories abound about rogue agents making up “rules” on a whim and then changing them in the next round – sometimes just days later. If said rules actually exist, they are subject to the interpretation of whoever claims “authority”. Even this is not the end of the power lust.

Bring on the enforcers. These take on many forms from uniformed police to men in black. Don’t get me wrong, I have mixed feelings about law enforcement. Many do indeed “protect and serve” and do so honorably. However examples abound on every level how police power is abused. Citizens are harassed, even jailed and/or subjected to secret courts. Homes are raided, dogs and citizens shot, property seized or outright stolen. Protest if you will, these incidents are neither isolated nor rare. Of course there is always the justice system… right?

Not so fast… justice? For the most part, justice belongs to those who can afford it. Even then much depends on who you are. Ask Roger Stone or Martha Stewart. Considering the bigger picture there is a reason judges are often described as black-robed thugs. Time and time again they rule against the people. Many courts will go so far as to threaten anyone who speaks of jury nullification with imprisonment. On an empirical level it is easy to see our “justice system” consistently expands government rather than enforce constitutional limitations.

What about elections? I mean, we voted these cretins in, we can vote them out… right? Can we? Recently, Judicial Watch, a strong citizens advocate, charged several states, including Virginia with allowing millions – yes millions – of votes by ineligible “voters”. We’ve all known for decades one of the Democrats’ most notorious constituencies is deceased “voters”. Add to this the fact that citizens have little, if any, say in who runs for office – such things are determined by political bosses, and we must face the reality: we citizens actually have little, if any, control over who “represents” us. How many times have you tried to decide between the lessor of two evils?

The only conclusion I can reach when considering all of these factors is tyranny has won… or at least they have us citizens on the ropes. The only thing left is to strip us of our means of physical self defense. While the controllers have made significant gains in many states, NY, NJ and CA among them, Virginia is seen as a pivotal point. Our commonwealth may very well be the last line of defense – not for our Second Amendment guarantees but for our very status as citizens rather than subjects.

Already the controllers usurped control over nearly every facet of our lives. As I and others repeatedly point out – there is no such thing as a limited government in our nation today. All of our constitutional guarantees of our God-given rights and freedoms have been soundly trashed for decades now. The phrase “it’s a free country isn’t it?” is a total joke. We are subjects, if not slaves in every sense of the word with the exception of no one person holds title to our personage. Even much of our property is subject to periodic payments for the privilege of “owning” it. 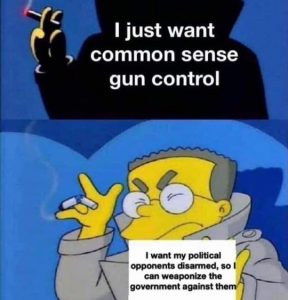 If the controllers exert this much power over us when we are armed to the teeth, how bold will they be once they can burst into our homes with no fear of anyone shooting back? Who or what will stop them then? Many suggest the end result will be the act of herding undesirables into cattle cars. Is this really unthinkable? Is mass murder of deplorables beyond comprehension? It has already been proposed. The only thing stopping some is our ability to defend ourselves.

While I can see the importance of current events, I contend we must look beyond this. We must first realize it is unlikely the controllers will back down now. Their dream is within their grasp. While they may put on the skids enough to slow down their ambitions, no concessions will satisfy their lusts. I am just as sure some see the current situation in Richmond as a window of opportunity. It could and should be gone by the next election cycle. What would you do in a case like this?

Either way, we must face certain facts. Second Amendment issues are only part of the picture. As stated in the title it is the final line of defense – the last straw. We need to unload the camel. It is not enough to win on our God-given right to keep and bear arms. Beating back the controlling hoards is a temporary solution at best. We need to stand up as citizens and reclaim the commonwealth and our nation – all of it. We need to insist in a return to a constitutionally limited government. This will not be easy. Just as one cannot lose weight gained over years in a week, we cannot trim government down to constitutional levels overnight, but the longer we wait, the harder the task will be.