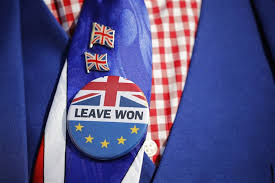 For those who may not remember – it was June in 2016 when the people of England voted to leave the European Union. Now known as Brexit for “British Exit” the battle raged on until January 31, 2020. Some wars experienced shorter durations.

Most of the problems associated with Brexit were political. The politicians in control did not want to leave control of the EU. The Brits endured all sorts of threats and predictions of dire consequences. They persevered and eventually won their freedom. In the end the solution was also political. The people voted out the politicians who were dragging their feet. The doors no sooner hit their collective asses when the Brexit finally happened.

In other words, things went at a snails pace and then BOOM! They’re out. In a word… inspiring. Unlike the United States in 1861, the Brits were able to leave the European Union peacefully. Nobody needed to take up arms. It is a good thing too because it may present a problem to come up with a single working firearm and two rounds of ammunition between all the citizens of that nation. Sad and not quite true but more accurate than makes one comfortable. The good news is no one needed to fire any shots. There was no civil war, no armed conflict. For that we all can take note with a sigh of relief.

So it’s all good right? Well, no, probably not. I doubt very much if the EU will refrain from attempts to punish the Brits. This does, after all, set a bad example. For goodness sakes what IF Britain thrives? It could be the beginning of the end for the EU! There will be other problems as well, I am sure.

Even with a successful Brexit there are plenty of issues to deal with. Not the least of which is the nation is very much a “nanny state” that has all but put the lid on liberty. Yes, the people have spoken and yes they were heard, but they are still enslaved by their own government.

We say a lot about our loss of liberty in this nation. Surely I am quite vocal about it myself, though not nearly as vocal as I’d like to be. That said, we are still in far better shape than Great Britain. Even so, we only need to look across the pond to see where our nation is headed. At this point I’d say the greater lesson to be learned is what can be accomplished with a determined population i.e. Brexit.

With all the shackles hindering them, they were still able to accomplish what we here in the South failed at – leaving a union. Yes, things are different. Times are different but even so, they did it! Bravo!

As for our nation, I cannot see such a thing happening with comparative ease. Indeed there would be a great deal of resistance. I do not see it coming to open warfare again but it wouldn’t be pretty. And if you think the British and EU politicians can drag ass, there are plenty here who would say “Hold my beer.” If US politicians are expert at anything it is doing nothing – unless, of course, “something” involves spending our money.

The lesson we patriots should take from Brexit is we can accomplish anything we want if we focus our efforts, stick together and push the issue. We are at a turning point now. We can either accept the dominance of the controllers or claim our birthright.