Previously I wrote about President Eisenhower’s final address to the nation where he warns about “The Military Industrial Complex”. He wasn’t alone, nor the first. 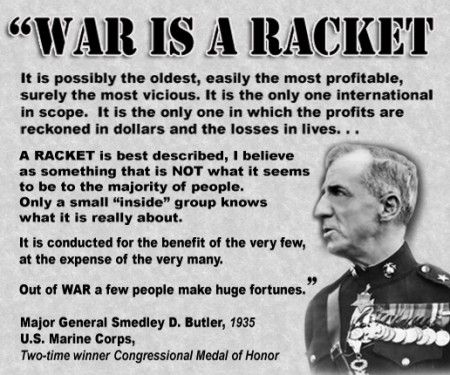 Two-time Medal of Honor winner General Smedley Butler wrote the book. Literally. It was called “War is a Racket”. His book, published in 1935, predated President Eisenhower’s revelation by more than 20 years.

Both were men of war. Both achieved high ranks in the US military. Both saw how the politicians have corrupted an honorable profession for personal gain.

This is one more reason we citizens need to reclaim our birthright and take back the reins of government. You can find General Butler’s book here: