With less than a week to go, the airwaves are electrified with news of a heated race. I’ve hesitated to post my thoughts on how I expect it to turn out. Why? Mostly because the last thing I want to do is discourage anyone from voting. Even if McAwful was the ONLY candidate running – I would rush to the polls on election day and write in my vote for anyone else. I do not care how much or little my voice counts – I will have my say.

It doesn’t take a political genius to figure out I don’t like the Democrat. He was a crap governor the first time around, his lieutenant, now governor, is just as crappy and now this Democrap wants to be governor again? Please. Let me put it this way…

I would walk through a blizzard, barefoot for miles to cast my vote against this guy, even if he had no opponent and zero chance of losing the election. Now you might think I don’t much like the Republican Glenn Youngkin. Well, you are right. I don’t. For one thing he’s already promised to throw money at the school system. As far as I’m concerned, a better plan would be to extract the fat from the bloated middle management of every school system in the commonwealth. It is a case of too many chiefs and not enough Indians. There are other things about him I picked up along the way that gives me pause as to how good a governor he might be. That said, I already know what kind of governor his opponent would be and that is enough.

Now about my prediction. Before I get to that, I’ll clue you in on my “methodology”. It is not complicated but it tends to be highly accurate. How does it work? Well, I poke my head above the clouds from the smoke-filled rooms and look around. No crunching numbers here. So what do I see?

Before I get to that, lemme tell ya what I saw before. First lets venture back in time to the 2020 Presidential Election. No, I’m not going to regale you with my previous eagle-eyed insight. Instead, I’m going to point to the early evening of that election day when the winner of the vote was announced with just 3% of the returns counted. Of course that “winner” was Joe Biden. Three percent of the vote tallied. How did they do that? Can you say… “fix”. Now wait a minute.

That wasn’t the first time something like this happened. In 2016 Hillary Clinton won Virginia. While I am not sure when they called that race but what I can tell you a few things I remember. First of all Trump was quite a bit a head early on. Enough so where I thought he might actually win the Commonwealth. Then the votes started pouring in from Northern Virginia and it was all over. The problem was, there were multiple reports of election fraud also pouring in. Polls stayed open way past closing time. So-called “voters” who couldn’t show identification or gave the wrong name… all sorts of improprieties were reported. Granted it was nothing like what we saw in 2020 nationwide but it was bad enough where one might expect someone to at least investigate. Nope. Nothing. Not one word, ever I heard again.

Fast forward to 2021 again. This time let’s visit California. Remember Newsome’s recall election? Do you also remember how he declared victory the day before the election? He did not say he thought he would win. He outright declared himself the winner. How do you do that? It’s not hard when the fix is in.

So by now you’ve probably guessed what I will predict and you are probably right on the money. This will not keep me from casting my puny vote. It is all I’ve got and, as I said, I will have my say. 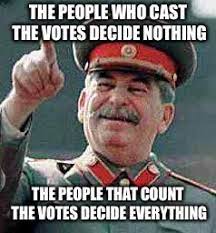 Now for anyone living here in Virginia, you may have noticed the ads playing for the election commission. Have you asked why? The election commission is the entity responsible for ensuring our votes are counted accurately, according to the letter of the law. That’s it. So why do they need to spend our hard-earned money trying to convince us they are the “good guys”? You know where I’m going with this.

The fact is I’m tired of seeing the talk about how Youngkin is even in the polls. I’m tired of listening to the “analysts” who insist McAwful has made too many mistakes, is running scared, and is in danger of losing this race. Get real. The fix is in. They might as well coronate McAwful now. Why not have Northam announce his own intentions the day after the election? That way we can rest assured who will be in charge for the next several years. They can tag team as they run the Commonwealth into the ground.

So here it is: McAwful will be our next governor. Go vote anyway. Make the bastard earn it.

P.S. There is another reason I am determined to vote no matter what. The reason? I hope and pray I am absolutely wrong! Nothing would give me greater pleasure than to see McAwful crash and burn in defeat. I might have a better chance of winning the lottery without bothering to buy a ticket but here’s to a hope and a dream!