So many have declared Joe Biden a failure. Per Slo Mo Joe’s last press conference, possibly the only thing he was clear on was he thought is first year in the White House was a rousing success. It’s all a matter of how you look at it. 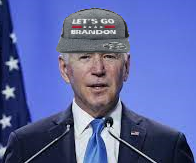 If you are reading this, chances are you’ve weaned yourself off a total diet of MSM , er, news. Even if you haven’t, I’m sure you’ve heard about Afghanistan, Inflation, Crime, the invasion of our Southern border by illegal immigrants, drugs and who knows what else. Take it all in. Do you see what all these things have in common? That’s right.

Everything Slo Mo Joe has done in this past year has been absolutely successful in ending the nation as we know it. This without mentioning the unending push to impale every citizens with jab after jab of what is looking more like deadly poison every day. Don’t take my word for it – now medical doctors and organizations around the globe are beginning to admit the damage these unproven concoctions are doing to the populace.

Just last night I saw where the Biden MisAdministration is colluding with cartels to promulgate human trafficking. That’s right. The cartels get paid to bring illegal aliens across the border and, apparently, are paid again to hand them over to U. S. “authorities”. So… does the “big guy” get a percentage?

The only logical conclusion I can come to is Biden and company are deliberately set on taking our nation apart piece by piece, in other words – deconstruction. This is nothing new, it’s been going on for a long time, but now things are heating up. We are at a crossroads in this nation. We can either take back our nation as citizens or we can stand idly by and watch those who are supposed to represent us and work for us take all the money and run. How do we take our nation back? It’s simpler than you might think.

Notice I said “simpler” not easier. First of all the usurpers do not want to give up what they’ve so diligently stolen. Plus they’ve accumulated wealth and power. OUR wealth and OUR power – at our expense. Little by little, by any means necessary they’ve chipped away at our nation’s resources until there’s little left but the bones. What they failed to recognize or simply ignored is our nation has great bones. And, well, there’s something else.

The wealth they’ve accumulated? Those trillions of US dollars? It’s all smoke and mirrors. Fiat money. They’ve printed piles of it until it’s worthless, or at least it will be if we decide to pull the plug. It may not come to that.  As far as the debt they’ve accumulated, well, I think we can deal with that too, but first things first.

We need to boot and reboot. Boot the scoundrels out of their cushy chairs and then reboot the nation. First, we need to secure our elections. Demand and end to the nefarious games they’ve been playing – stuffing ballot boxes, deploying shady ballot machines and the like. We have what we need in place in most places – at least enough to reclaim Congress and our state houses. We can work on the rest. I think we can secure it all if enough citizens step up and take charge. We ARE Americans, after all. Then comes the reboot.

I expect it to be messy but it doesn’t have to be. You see, like the slicky stuff they’ve been pulling on our money, they’ve also worked over our government and our economy.  Our government is simply bloated beyond belief. As I said, it will be messy but we need to stop the bleeding and that means put the brakes on spending. Don’t worry, the country won’t fall apart no matter how the rats screech.

Next we eliminate a few mountain ranges also known as government regulations. Trump almost accomplished this single-handedly despite being fought tooth and nail every step of the way. The fact is, he did a marvelous job economically and he only scratch the surface. All we really need is to get the government regulators out of the way. Let us roll up our sleeves and get to work. We won’t break the nation, they’ve already done that. We’re going to fix it. We’ll put things right.