This from Gateway Pundit…

The United States remains in a heightened threat environment fueled by several factors, including an online environment filled with false or misleading narratives and conspiracy theories, and other forms of mis- dis- and mal-information (MDM) introduced and/or amplified by foreign and domestic threat actors. These threat actors seek to exacerbate societal friction to sow discord and undermine public trust in government institutions to encourage unrest, which could potentially inspire acts of violence. Mass casualty attacks and other acts of targeted violence conducted by lone offenders and small groups acting in furtherance of ideological beliefs and/or personal grievances pose an ongoing threat to the nation. While the conditions underlying the heightened threat landscape have not significantly changed over the last year, the convergence of the following factors has increased the volatility, unpredictability, and complexity of the threat environment:

(1) the proliferation of false or misleading narratives, which sow discord or undermine public trust in U.S. government institutions;

(2) continued calls for violence directed at U.S. critical infrastructure; soft targets and mass gatherings; faith-based institutions, such as churches, synagogues, and mosques; institutions of higher education; racial and religious minorities; government facilities and personnel, including law enforcement and the military; the media; and perceived ideological opponents; and

(3) calls by foreign terrorist organizations for attacks on the United States based on recent events.

I’ve got just one question for starters… exactly who determines what is considered a “false or misleading narrative” and what standard do they use? 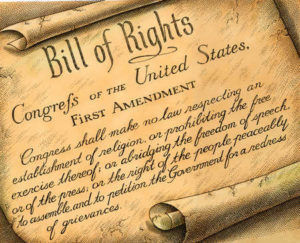 The fact is our government doesn’t need anyone to sow discord or undermine public trust in U.S. government institutions – they are doing just fine on their own.

If I didn’t know better, I’d think DHS has been reading this blog and they are scared shitless that We the People will actually turn out and show up at our respective county seats in support of the U.S. Freedom Convoy. What terrifies them is not that they expect violence. Quite the contrary, they know we are peaceful, unlike their Antifa and BLM minions. Nothing terrifies them more than the realization that we know WE are in charge. Our Constitutional Republic is designed to be decentralized and run from the bottom up. The last thing they want is to have the tables turned on them and that is exactly what a county by county show of strength and resolve would accomplish.

We don’t need violence. We do not need to protest. We do not need to shout. The quite but firm voices of tens of millions of citizens can be heard all across the nation. This is our nation and it is high time the usurpers, the authoritarians understood this.

Granted, there is a whole lot more going on in this nation than just the rantings in this little blog covers. In fact, I’m in a constant state of wonderous amazement on how many are grasping the principles of our republic. Quite certainly 99.9999% of this would occur if this blog never existed. Even so, I’m glad to be a part of it. This is an exciting time in our nation’s history. We are at a turning point and I firmly believe WE the People can embrace the principles our nation was founded on and become the Constitutional Republic as it was always meant to be.