I never intended to do much, if anything on the Chinese Wuhan Corona Covid19 virus pandemic, though I DO think we could probably come with with a few more names for it. Sheeesh! However, I started the other day with a dire prediction to explain why I and my wife decided to stay home for a while. Was this a good decision? I don’t know. It was based on the numbers I’m seeing and a whole bunch of different factors.

One thought struck me as I watched one of President Trump’s daily briefings. While I am not one to glue myself to the television, nor do I adamantly watch, follow or seek out any politician, I have caught a few of these, at least in part. Anyway, Trump stated he expected the virus to peak in about 2 weeks. Granted I take all such statements with a grain of salt. That said, I got to thinking. With an incubation period of 10-14 days, this suggests those who should know as much about this virus as anyone, think it is now as widespread as it is going to get. This being the case, NOW is the time to step back and hunker down. So we did. Now I watch.

So far I’ve been following the numbers. My first attempt at extrapolating these – drawing them out to see how the current trend might evolve was amateurish at best. While I may be improving, I doubt if I’ll ever be great at it. That said, I can share what I’m seeing.

To begin with I followed the numbers on the Fox News Home page. They have a graphic using Johns Hopkins materials. Then I went to the Johns Hopkins map page detailing this stuff. Better yet but they do not graph the daily death increase. As morbid as this sounds, I’m thinking it is more pertinent than other figures. Either way, I came across another page keeping count: Worldmeters. This one is nowhere near as fancy as Johns Hopkins but the numbers seem to be closer to real time – plus they have the all important (to me) daily death increase metric.

We had 1331 total deaths April 4th, up from 1045 April 3rd – April 2nd saw a total of 974. So far this is a startling increase in the number of people dying from this. Please note, I’ve seen some say not all of these deaths attributed to Wuhan, are actually Wuhan. Another grain of salt. 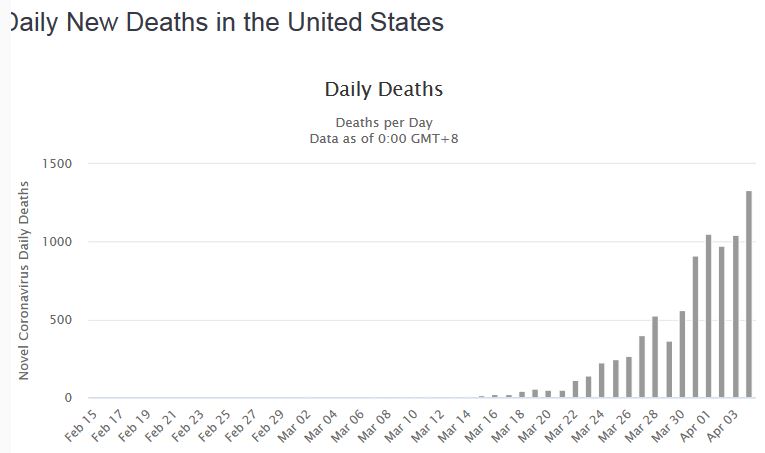 While the incremental increase is larger each day, the increase as a percentage has declined slightly. This is somewhat encouraging. However I am not sure if it actually means anything. So what happens tomorrow? If the pattern hold out, we should see a decline. Look again at the graph:

The numbers go up, up, up and then down before rising again. This pattern is pretty consistent. Not only that but the day after the numbers will rise again and again. On the third day we should see a spike. This has mostly been the pattern so far. Will it continue? Yes and no.

As with any pattern, it could break at any time. As those in financial circles like to say “past performance does not guarantee future results”. As a matter of fact, at some point the pattern WILL break. It has to as the only other possibility is for it to continue until the human race is extinct. Oh, wait a minute, the pattern would still have to break… wouldn’t it?  The bottom line is, it is not a question of IF it will break but when. Why is this important?

A break in the pattern will indicate a change.

Right now, my biggest concern is whether we will see an exponential rise in cases and deaths. Why be concerned about this? Look, I know some people hate to think of math – especially when it come to more advanced ideas like “exponential” stuff. One easy way of looking at this is the “double a penny a day” concept. If you had a penny and could double that every day for 30 days… how much would you end up with? Over $5 Million dollars. Look at the chart below.

This same idea works with people infected with the virus only the numbers are worse. Why? Because each “penny” i.e. each person infected can infect as many others as they come in contact with – either directly or indirectly. THIS is the problem! Consider the number of people in the U.S. now infected… over 311,000. Each one of those who now are confirmed as having the virus walked around for up to two weeks potentially infecting others and those “others” are infecting still more people. This does not account for those who have it and are NOT confirmed.

Please understand, I am not putting this out to cause you to fear but to share the bigger picture I see. Already we are mitigating this with frequent hand-washing, masks and keeping distance. All of this slows the potential spread. As I said before, closing the schools could be the BEST thing anyone could have done. Not because schools are bad or the kids are rotten – okay, maybe we can get back to that 😉 but because parents have to work and schools hate to miss their cash flow from attendance so the trend is to send sick kids to school anyway. I cannot count the number of times my own kids brought home bugs from school. Early on, we kept our kids home if they were questionable, but after so many times we just shrugged and sent them to school. Due to the trend, all we were doing was keeping our kids from getting credit from being at school, er, getting an “education”.

The bottom line is while some howl in protest, I would still rather take a few days off from work and keep an eye on things. Hopefully, I can accomplish a few things I can’t while at my day job. The economy is already in a shambles. My actions will not even register on the economic scale. We can thankfully withstand a bit of wage loss. As such our decision is intensely personal and is by no means a recommendation one way or the other. I can only suggest you evaluate your circumstances and make the best decision for you and your family. You may find an entirely different set of metrics to base your decisions on. Hopefully, my reasoning, such as it is, will at least provide something useful to you.