Don’t get me wrong – I like Tucker Carlson. As far as I’m concerned he is one of the best commentators on television. I also think he has one of the better minds of anyone in media so I gotta ask…

TUCKER! What the Heck is Wrong with You?! 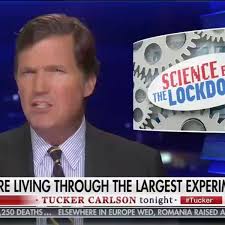 Last night I found my self screaming at the television at this man. Why? Two things really. One is ongoing, the other I only caught last night.

First, one of my pet peeves about Tucker is his habit of calling politicos “our leaders”. I almost expect him to genuflect when he says it. Tucker: these guys are NOT our “leaders” – they are our REPRESENTATIVES! They are entrusted with the business of the republic. We all need to drag these people off their pedestals and podiums, sit them down and read them the riot act. But that wasn’t what set me off.

Last night Tucker was saying on how before this pandemic, we had an imperfect but functioning democracy.

Tucker: ours is a CONSTITUTIONAL REPUBLIC NOT  a “democracy”!

Why is this important? Because mobs rule the one – ours is a representative government. We do not want or need mob rule and we MUST get back to the concept of self-government if we are to restore our nation.