The latest from Canada is Trudeau and company began their attack by arresting at least three of the leaders of the Freedom Convoy. Now they have expanded their efforts and are making mass arrests. Once again the authoritarians have placed snipers on roofs. Why? These truckers have never been a threat to anyone as far as I can see.

There can be only one reason why Trudeau  is arresting rather than meeting with these truckers. He has absolutely no intention of relinquishing the power he as usurped no matter what the cost. Again I ask… will Trudeau attempt a trial massacre?  Will the truckers arrested be Canada’s J6 POW’s? Time will tell.

How does this bode for the US Freedom Convoy?

My understanding is The US version of the Freedom Convoy is to begin on Wednesday February 23, 2022. Already we’ve seen rumblings from Washington about similar measures planned by our own government to upend any “dissension”.  Any citizen who dares say anything contrary to this administration’s view is already deemed a “terrorist”.  We cannot allow this!

To this end I’m advocating citizens across the nation show our support by meeting at our respective county courthouses – outside, of course. This is just a show of support.  As we are represented in both state federal governments, our presence should send a clear message that we support these truckers and freedom in general.

I set the time for all of this to begin 6PM so more who hold day jobs have a better chance of attending. Hopefully Patriots at many locations will keep the vigil going from dawn to dusk until our truckers reach D.C. 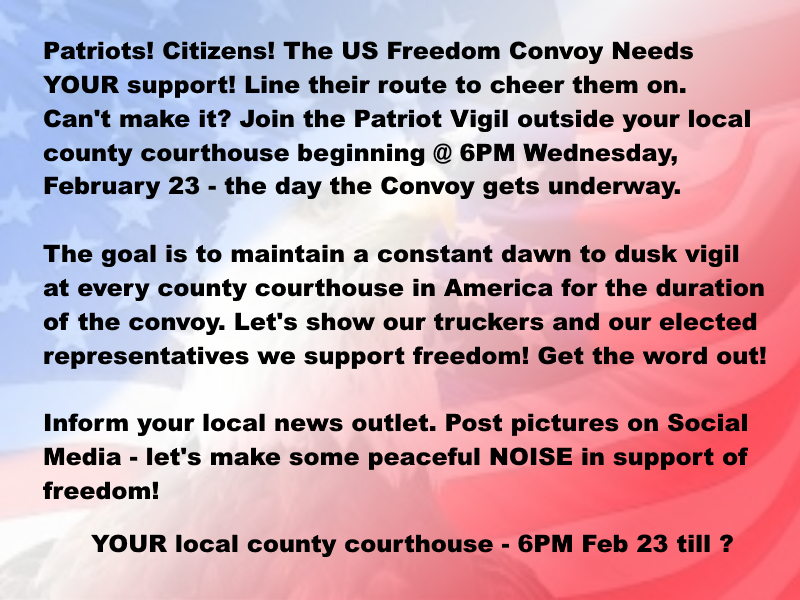 Let’s go viral. Please post the above meme anywhere and everywhere you can!

We ARE the government in this nation. Our elected officials and representatives work for US. It is about time we made this clear.