If you are a regular or even occasional reader of this blog, you know I’m right – or you soon will. Unless of course you only stop by to scream at your screen. It’s all a matter of perspective. Ask yourself… what constitutes success as a US President? If you want to cling to those old notions of a vital nation offering opportunity and security for all citizens with equal justice under the law, then you likely deem #46 an utter failure. And you should. But IF one’s goal is to utterly destroy our nation, to bring this country to its knees, well then Slo Mo Joe’s your guy. 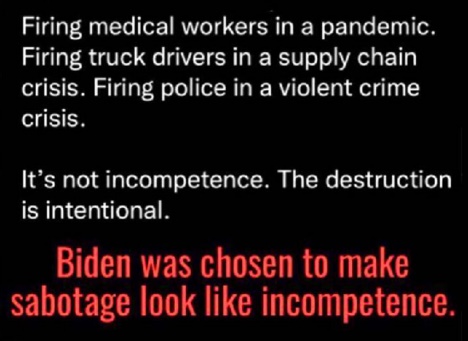 Too many these days are lamenting the incompetence of this pResident. Personally, I’d say he first has to be cognizant to be competent. Biden is neither. The evidence is overwhelming. As the meme above says, the destruction is intentional. But WHY? Again, if you’ve been visiting this blog for length of time, you already know my train of thought on this topic. For the uninitiated, I’ll be blunt.

The goal of the globalists is a global government. The United States of America stands in the way. Our nation may be the ONLY obstacle keeping the globalists from world domination. That they lust for total power is not some “conspiracy theory”. It is fact as stated by the globalists themselves.

Those who consider themselves the “elite” believe they and only they are qualified to govern. Us proles need to be ruled. Certainly we are not capable of governing ourselves. Consider anything you’ve ever read from the globalists. Has any of them proposed anything remotely resembling our Constitution? Of course not. Don’t be silly.

While one may dispute whether the efforts to install a global government is coordinated, thus confirming the idea of some conspiracy, it becomes harder every day to deny the direction we are headed. Meanwhile either coordination or cooperation to achieve a common goal becomes more evident every day.

Simply browsing current events churns up mounds of suspicious crap. Putin and Xi are all but sleeping together. Both have been in bed with Biden and his controllers. While Zelenskyy puts on a great show, it is quite possible he’s just playing his part. Then there’s Iran. Can anybody tell me with a straight face how Biden swears enmity against Putin from one side of his mouth while begging him to negotiate a deal with Iran on behalf of the United States with the other? I swear the man would sell snake oil if someone loaded the script on his teleprompter. Oh! Wait a minute! Have you had your booster today?

This morning, this meme gave me pause for thought: 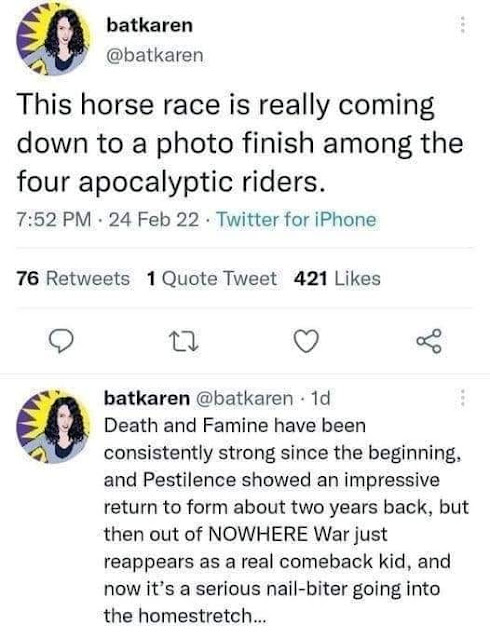 I’m sure y’all recognize the reference to the book of Revelation. Even I’ve questioned whether we are fast approaching the end times. My understanding is we have a ways to go before we actually get to the prophesied four horsemen but the kickoff (the rapture) could happen at any moment. Seriously.

Granted, for over 2,000 years we Christians have been encouraged to live like Christ is coming at any moment. I get that, but every day as I see more and more incredulous stuff, I can’t help thinking – we’ve gotta be right on the edge! At least I’m at the nail-biting point these days.

Back to Biden’s success meter.

According to Biden’s meter he is a huge success. And, like I said before ,if his goal is to destroy our nation, I’d have to agree. Not even Nobama was able to deconstruct our nation so completely in so short a period of time.

Where is it all going? Stay tuned. My next post will discuss two possible scenarios – each one far different than the other.