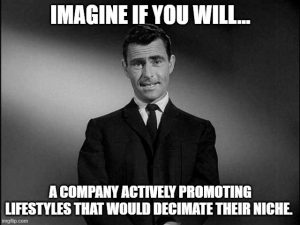 Just for the moment, set aside Disney’s crusade to reverse Florida’s new parental rights law or as the left has misnomered it, the “don’t say gay bill. Forget whose side they are on. Forget that the overt protests are about the prohibition of sexualizing children up to grade three. As a matter of fact, for the time being, don’t even consider the fact the Disney is essentially actively supporting the grooming of young children and/or indoctrinating them sexually. Leave it all behind and consider this:

The LGBTQ2S+ (whatever) crowd Disney actively supports is totally contrary to their business model. Disney’s market is children. This market is their bread and butter. If they had to rely on adults or LGBTQ2S+ for sales, they’d be broke already. Maybe we should dub them “bwoke”. The simple fact is it takes a sperm and an egg to produce the baby who will eventually become old enough to enjoy Disney products. The most common ways babies are born are via heterosexual relationships. Gays, trans, as well as the rest of that bunch, well, they cannot “replenish the earth” enough to keep Disney’s business model going. The numbers simply aren’t there and they never will be.

In light of this, how smart are Disney’s execs? I’d say not very. In fact they are downright stupid on the face of things. Now maybe they have some overall “grand plan” to transform Disney into some fantastic business model that will reap them even more billions than their current efforts. So far I see no evidence of that. At all. What I see is Disney, and other corporations vying for the children’s market promulgating homosexuality.

Is there not one person in this industry questioning this? Like, “Wait a minute! We NEED child consumers! We NEED people making babies!” It would seem to be the better business decision for Disney and their competitors would be to promote anything and everything to ensure their market grows rather than shrinks. That means they should be promoting marriage and heterosexual lifestyles. They should be advocating for parental rights, for as many babies as possible to be born. They should be the biggest donors to places like St. Jude’s Hospital and other organizations dedicated to curing children of deadly diseases.

Now some will certainly try to label me as “anti-gay”. You folks should note that I am decidedly pro-liberty. However, your liberty ends where another’s nose begins. When it comes to children, parents’ rights are extended to them until they become of legal age. Thus, what so many call the “don’t say gay” bill should never have been necessary. The need arose only after some decided to overstep the rights of parents’ who are the guardian of their children’s rights.

As for Disney, you folks aren’t “woke” you are just the opposite or blind. Either way, I certainly hope the rest of the world can see how incredibly bad business your recent decisions really are. It sure looks like many of us parents see it.