As the pandemic rages, speculation abounds!

In recent posts, I’ve offered articles and observations about controllers doing what comes naturally… exerting control. For the most I’m pointing out how they’ve abandoned their facades, showing their true colors.

My own hope is we citizens can seize this moment ourselves and reclaim our birthright, our liberty and restore our nation to the limited government intended by the founding fathers.

Not so fast, Bucko. In case you haven’t noticed our “champion” President Trump not only signed the last abominable pandemic act but is now proposing a new one. At the risk of ticking everybody off, I am neither Anti-Trump nor Pro-Trump. He is one man. Even if he is or will become the BEST PRESIDENT EVER, he can only serve one more term.  Trust me on this one, the deep state can survive President Trump. That said, throwing another few trillion into the fire is not going to fix our nation. What it WILL do is enrich and entrench more deep state swamp creatures.  How do I know this? Every dollar spent filters through one or more creature lair. They are everywhere. Think cockroach infestation on steroids. 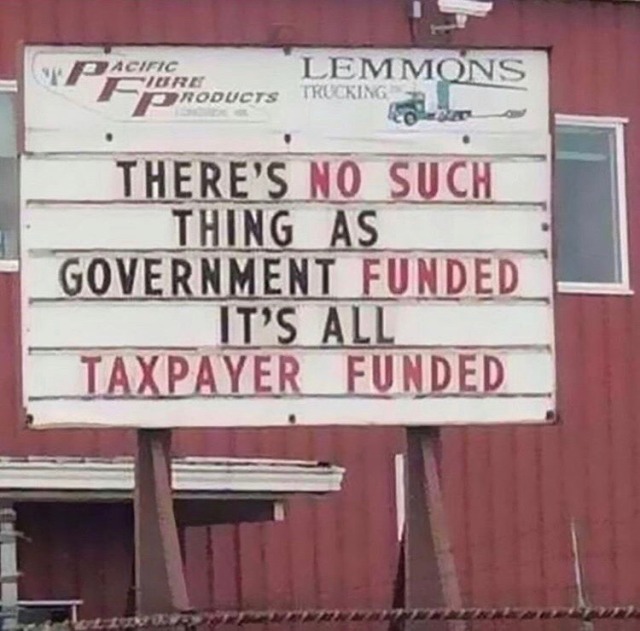 This pandemic has devastated ours and the world economies. We can’t spend our way out of this. Trump’s reasoning is pretty simple, at least from what I heard him say. He says that since we are paying almost zero interest on this debt, it is “free money”. I guess nobody told him there is no free lunch. If you know anything about The Donald, you should understand his critics are correct to point out his bankruptcies. How and why does anyone go bankrupt? By borrowing more money than you can pay back.

While I agree on the need for roads, bridges and things like high-speed internet at my rural door, this is not the way to go about it. Let’s face it: our employees on both the state and federal levels oversee annual massive budgets. My point is, they’ve had money to spend, OUR money, all along and yet the infrastructure suffers from neglect. As so many have pointed out before, our governments do not have a revenue problem, they have a spending problem. It has got to stop.

What’s the alternative? It is simple but not at all easy. We need to shut government down. Make them get out of our way. It cannot happen all at once – or at least it should not. For example suddenly shuttering Social Security would destroy those who depend upon it. The same goes for Medicare.

That said, I can give you an example near and dear to my heart. Hemp.

Here in Virginia, the hemp industry is getting underway again. Last year was the first year when farmers could openly grow it – with the express permission of state. This year, they’ve been handed ten more pages of regulations further impeding what they can do.

I have a friend who is a farmer. He’s grown tobacco all his life. Now that the government has almost entirely destroyed his livelihood, he’s trying hemp.  Last year was not great for him but promising. Instead of expanding on his success, he is facing more issues. It is bad enough he has to wrestle with the problems facing him from learning a new crop but he is forced to work around state officials whose sole purpose is to impede his progress. What is their concern? Why, he might grow marijuana instead! Oy.

For years, I’ve heard  many say, legalize it and tax it! Some states have done just so. Bluntly put, screw that. Let’s say we get the government out of the pot business entirely. In other words… stop – just STOP! Yes, I realize this means a pretty good hit on government revenue. What will law enforcement do if they cannot stop citizens in the streets and search them because the “smell marijuana”? What will they do if they have to forgo no-knock raids and stop killing dogs and citizens in the process? The HORROR! Get over it. The price we pay as a society is not worth the results. Drugs have not been eradicated. Quite the contrary, they are widely available. Get real. Get over it and drop it.

This is just one area where government needs to go. Other cottage industries need to flourish. Many do not because of… you guessed it – government regulations. Let’s start with income taxes. Shutter the IRS. You heard me. Close the doors. Lock them and melt the freaking key!

From there we can start the shut down by attrition plan. No new hires. If someone retires, either their job is eliminated or filled from within. Once we get started we should be able to identify all sorts of government agencies we can do without.

Okay so maybe I’m dreaming. Is it so bad to fantasize about putting government where it belongs – UNDER us? Is it so wrong to want to reclaim my birthright and take my rightful place in a nation of self-governing citizens? I don’t think so. It appears I am not alone.

The article below speculates this pandemic could actually help accomplish my dream.

Are the Globalists Finished?