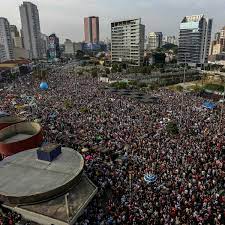 Unless you only watch MSM or otherwise live under a rock, you’ve seen what’s going on in Brazil. For the aforementioned readers who someone stumbled upon this post, I’ll elaborate.

Brazil recently elected a new president. From what I’ve been able to ascertain, he is a convicted felon and an avowed communist. While felons are prohibited from running for that nation’s highest office by law, it appears the communist-leaning court gave him a pass. Does any of this sound familiar? Oh, yeah, that’s right, your MSM blinders don’t allow you to see anything other than the “official” party line. Maybe you’d better sit down. You see, the courts here in the good ol’ USA have likewise squelched any hint of electoral impropriety to the outrageous extent of branding the events in DC on January 6, 2020 as an “insurrection”. Nothing to see here, folks. Move along now.

It was only recently when CBS decided Hunter Biden’s laptop was really was Hunter Biden’s laptop and not some “Russian Hoax”. Now we are seeing the massive extent our own shadow government went to suppress this and a whole bunch of other information in order to install Slow Mo Joe in the White House. All that is just the beginning of sorrows initiated by the usurpers of our nation. Enough of that, back to our regularly scheduled post…

So Brazil’s election was compromised, beginning with a nominee who wasn’t legally qualified to run anyway and ending with massive fraud perpetrated to “elect” a communist, essentially turning the entire nation of Brazil over to the China. But that’s not the real story here. The real story is the reaction by the citizens of Brazil.

They are pissed and they are protesting en masse – all across the nation. The streets of ever major city is filled with citizens who are demanding this wrong be righted. That’s the story. Now for the problem…

Just like here in the US of A, nothing is happening. Here we’ve seen scandals, fraud and widespread criminality all over the place. From elected officials compromised by foreign agents, to open total disregard for our constitution, to former Vice Presidents promoted after openly admitting – bragging, actually, on video, to using his influence as VP to get the man investigating his own son fired by threatening to withhold foreign aid. The list of crimes alleged as well as blatant, staggers the mind and yet, only a handful of scapegoats are pursued and/or prosecuted.

Citizens who dared walk into the Capitol building on January 6 languish in prisons unfit for any human, not only deprived of their constitutional rights, but horrifically beaten and abused, while criminals who firebombed a police car are slapped on the wrist. Again and again, we see our nation sinking into lawlessness and all we can expect is more of the same and worse. How does this relate to Brazil?

Just like these things detailed above in the US, the citizens of Brazil are being ignored. Word is, the government there will impose martial law. The implied threat is “shut up about it or we will kill you.” This is the problem. If you’ve happened to have seen the masses protesting, there should be chills running down your back. First comes the realization that with so many Brazilians protesting, something is very, very wrong and the entire world should be taking notice. Then comes the sucker punch – their protests are not likely to have any effect. Yes, things might end badly either now or in the future. Yes, this may be the start of a very unstable Brazil for months, maybe years to come, but the will of the people is being subordinated to the will of the usurpers. This is most disturbing. Worse, it could be a portent of things to come here and all over the globe.

Not too long ago, I envisioned similar things happening here as those events in Brazil. Think of it, all across the nation, citizens gathering at county seats, asserting our authority as citizens and taking back our nation. What a display of citizen authority! Can you see in your mind’s eye, photo after photo in Twitter of citizens standing tall at their county seats? I was certain it would cause the usurpers to tremble with fear and awe once they realized their gig was up. While such an even could happen, what shook me was the apparent apathy of the Brazilian demonstration. It’s like nobody even bothered to yawn. Are the powers that be so confident of their grasp that they simply don’t care? What would it take to make them take notice?

Likewise Chinese citizens are protesting also. The crimes committed on them are even more mind-boggling in that they are being herded into facilities, let’s call them what they really are, concentration camps. Those who resist are beaten and even killed in the streets. One apartment building had the doors welded shut so the world watched in horror as residents were burned alive. Like the Brazilians, the Chinese government has yet to be challenged. If nobody stands up for them, who will stand with us?

That’s the problem I see. Is there a solution? YES! For most of you, it is not what you think. Not at all.

Wait! What?! Really??!! In a sense, yes, really. I am not advocating leaving the country or giving up. What I am advocating is a complete refocus of our efforts. Now I’ve gone down this road before but this time I mean to burn some bridges, so to speak. For the most part, any and all political action is dead or dying. Can we take back our nation county by county? I do think it is still possible but recent events lead me to believe such efforts are more than not likely to fail. Why?

Look at this last election. Yes, the republicans reclaimed the House of Representatives. whoopie. (was I able to convey my nearly total lack of enthusiasm here?) Meanwhile Arizona’s election was stolen and it looks like it will remain that way. In New York? The democrat machine reinstalled the entirely uninspiring and totally worthless Kathy Hochul. Pennsylvania likewise sent the barely functioning John Fetterman to the US Senate. Michigan went to Gretchen Whitmer. And so on and so forth. As I’ve stated before, it doesn’t matter one whit whether any of these elections were on the up and up or not. It really doesn’t. Unless the cheating was done on such a scale that it totally overwhelmed the will of the People, we need to come to terms with the fact that a significant number of citizens actually voted for these individuals.

Even IF the anticipated “Red Wave” took place, the result would only be a band-aid on the gaping wound infecting our nation – and the adhesive on that would barely cling. The real issue we’re facing is much larger than any one election can address, much less repair. The real issue is we’ve lost God. As a nation we are a people wandering in the wilderness, wondering why God has abandoned us. In truth, WE have abandoned HIM. For this reason, I’m advocating we abandon this “ship”, i.e. an political remedy and turn our attention fully upon God. How can we do this?

For those of you involved in your church already, and I mean really involved, step back and examine what is going on in your church. What is your focus? Are you going through the motions are you in the trenches? Is your church focused inwardly on members or on outreach? Is it effective? Are you bearing fruit? You can ask this of yourself as well as your church. The fruit you bear is the harbinger.

If you are not involved in a church… why not? Are there no churches near you that bear fruit? Surely there must be some Christians in the area doing God’s work. Find them. Join them. Or start something yourself. Look to God to lead you.

If you have not accepted Christ, I’m not sure what I can do for you. Nobody can make you. That’s the whole point. If you are still reading this, I suspect you are doubting your own convictions. All is not lost as long as you are still breathing. Believe it or not, God will help you. I am living proof. God literally saved my life (maybe multiple times, I don’t know.) both before and after I accepted His Son Jesus as my Lord and Savior. He guided me to exactly the right people to provide me with exactly the right information I needed to be saved. And get this, the people He guided me to were not all from some “church group”. Only one was attending services at the time. Ask God to show you the way. Email me if you like.

At this point in history, I do not know what the future holds. Okay, I never do, but that is beside the point. I once had hopes this nation could be restored. Now I am not so sure. Either way, we need to seek out God and His Will. As for me, I’m forming a bible study group. My goal is to get together with other believers and seek out fellowship and biblical truths. My own idea is for this to be the first of many seeded study groups. Whether this is what God has in mind is yet to be seen. All I know is I feel the need to reach out and this is my first step to that end. My own life these days has not born as much fruit as I feel it ought to, so I am doing exactly what I advocate.

What matters most today is outreach. As a Christian, if you are reaching out already, ask God to show you how to do more. If you are not reaching out, then ask God to show you where to start. If you have distanced yourself from God, then your first step is to draw nigh to Him. We can do nothing without God. Until we turn to Him, our nation will continue to decline until we find ourselves fighting for our very lives. Our best effort now is to immerse ourselves in the truth, hold it forth and stand fast.