The article below is far too sketchy on details, but on the surface, the tale is chilling. Here’s what really bothers me:

Ryan-Marie, who is a homeschool mother, explained the SWAT team of 25 to 30 FBI agents swarmed their property with around 15 vehicles at 7:05 a.m. this morning. Having quickly surrounded the house with rifles in firing position, “they started pounding on the door and yelling for us to open it.”

The federal crime the suspect is accused of:

Mark was arrested and appeared in federal court, charged with violating the Freedom of Access to Clinic Entrances (FACE) Act, “which makes it a federal crime to use force with the intent to injure, intimidate, and interfere with anyone because that person is a provider of reproductive health care.”

The details as stated in the article is he pushed a 72 year-old man to the ground as he attempted to escort patients.

First things first, if this man did what he is accused of, I have absolutely no problem seeing him punished appropriately. Furthermore I would immediately condemn his actions. No question. That said, does the actions described above warrant 25-30 agents in 15 vehicles showing up at his home at 7:05 AM, rifles ready (no doubt at least some FULLY AUTOMATIC WEAPONS among them) to arrest him? HELL NO!

For goodness sake, at worst this guy is a bully. IF that is true, what does that make the feds? Are they that scared of this dude? From the picture I saw he is about as scary was Ppppppp-piglet. Maybe they just didn’t have anything else to do that day. In that case, I’d say that field office is horrendously overstaffed. Think how much us taxpayers would save if we reduced the sizes of just that office to three agents. It’s not just agent salaries either, but they wouldn’t need all that plush office space either. Seems to me they’d do just fine in a double-wide converted into an office. I’d let them keep the kitchen intact. Or was this raid yet another one of their intimidation tactics? Okay, fine, then stop it. Just stop it. You guys are law enforcement, not thugs. Do your job, enforce the law. Leave the gorilla work to the mob.

These stories are getting tiresome. Grow up guys or I’ll insist we take your toys away.

THIS IS NOT THE AMERICA I KNOW: Dozens of FBI Agents Raid Home of Catholic Pro-Life Activist as Children Scream in Terror

So he initiates a raid. It seems the couple had two homes. The sheriff searched the first after Ms. Hwang granted permission but refused permission to search their second home. Bianco searched anyway. He didn’t have a warrant for either search.

This is almost as bad as the Kansas family that was raided for growing tomatoes.

Why “almost”? In this second case cops staked out a local garden supplier. At least they had a bare bones claim of “probable cause”. In the CA case, I don’t see where it is anybody’s business how much power a citizen uses. Period. Too much, too little, bite me. As long as the bill is paid MYOB.

The bottom line is, unless WE the People put a stop to such nonsense, the “authorities” will continue to generate any excuse to harass and intimidate citizens.

The gist of this article unveils the Regime’s continuing efforts to single out and neutralize if not outright destroy any opposition.

Julie Kelly is THE ace journalist covering the J6 Political Prisoners. She also covers other important stories. She is well worth following. Near the end of the above article she states:

“Either way, the goal is to stoke a political uprising in much the same way these interests accomplished what they wanted on January 6, 2021. It follows a familiar pattern of name-calling, false accusations, and blatant cover-ups in the reckless pursuit of power.”

Keep in mind the ultimate goal of the globalists is a one-world government. This cannot happen as long as the United States of America remains sovereign.

Last night I saw a segment about CBS’ Face the Nation where they cite “research” suggesting some 13 million Trump supporters “could” support a move to use violence to reinstate Mr. Trump as President.

This is total and utter nonsense. Again, it is part of their agenda to do everything possible to discredit, isolate and ultimately eliminate anyone who dares embrace our Constitutional values.

Certainly there are those on both sides who lust for violence. What are the real numbers? I don’t know. What I do know is a great majority of us are law abiding – so much so that those of us on the side of supporting Trump endure far more than we should. And by “enduring” I mean that rather than rallying in protest (something I firmly believe is both ineffective and unnecessary because we citizens ARE the bosses.) or otherwise acting out like so many on the left, we patiently wait and look for the law of the land to work.  Those who are violent or otherwise break laws, we expect them to be brought to justice according to due process – even those who claim to be on our side.

Amnesty from the AFT?

I don’t know what is worse, the idea that the ATF somewhere, somehow as acquired some mystical powers to “grant amnesty” to any poor slob who purchased an entirely legal (even under their usurped “authoritative” scrutiny) pistol brace, or this legal idiot’s apparent attempts to pave the way for law abiding citizens to avoid the trap laid out by this boondoggle.

No. Just no. The very legislation the ATF relies upon to expand their purview is, in itself, blatantly unconstitutional. Where in the Second Amendment does it say “shall not be infringed except… when Congress decides otherwise”?

While I never bought into the whole “pistol brace” fad or any of the other “cool stuff” like bump stocks, etc. that evokes those mystical ATF powers, it is only a matter of time before something I own will suddenly become disfavored, unless, of course, I do my duty as a citizen, confess my sins and pay pound of flesh to the ATF.  No matter what you own, be it a firearm or a slingshot, the authoritarians want to know. It’s for your safety, don’t you know.

Hey Joe Bobo and y’all here’s a clue: WE are the government. You work for US. Bite me.

I thought I’d try a new thing and post a few articles I find from different places I visit.

Yeah, I know, I thought of that brilliant idea all by my self. But it is new to me, okay? I’ll comment from time to time on some of these, and I’ll try to work up some more interesting headlines as well. Enjoy!

A WV man is gunned down by federal agents at his father’s funeral while his 18 year old son watches.

IT IS TIME FOR COMMONE SENSE FEDERAL AGENT CONTROL

Really guys? Have you been watching too many episodes of Justified? NOT a class act. Okay, it is a class act. Is this how our federal agents are trained to “apprehend” suspects? Let’s start from the beginning. First, there’s this thing called due process. That means you arrest those suspected of committing crimes, then they are tried and then sentenced. It is YOUR job to to the arresting part. Leave the death sentences to someone else. Got it?

Martha’s Vineyard Liberals Scream ‘Not in my Backyard! 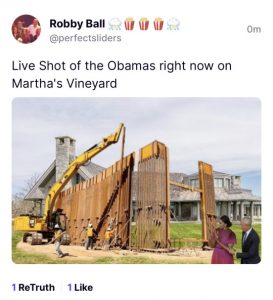 The Justice Department Was Dangerous Before Trump. It’s Out of Control Now, Part One, by Matt Taibbi

The Justice Department Was Dangerous Before Trump. It’s Out of Control Now, Part Two, by Matt Taibbi